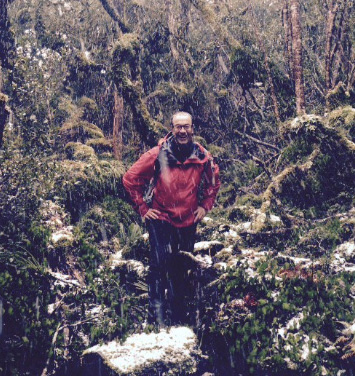 So…. Who are we and
what are we doing here?

What started out as a series of late night discussions around a pot-bellied stove, became a reality when a group of friends realised a little less talk and a lot more action was required if they were going to prevent any more of New Zealand’s native birds from becoming the next ‘Moa’.

This action took the form of information gathering to find out what was going to be the most effective way for them to make a difference.  They talked to the Department of Conservation, researched other like-minded groups, and undertook training out in the field.

Despite the sleet and snow Rob Morrison still manages to smile while clearing the traps in Winter.

As a result, Moa Conservation Trust (MCT) was formed in June 2014. Since then the trustees, along with a merry band of volunteers, have been rolling up their sleeves and getting down and dirty out in the bush. The first two trap lines resulted in more than 300 possum kills by November 2015.

Successful fundraising in 2016 raised enough funds to complete Stage 3 of our programme. In mid-2017 OSPRI stepped into the picture with the commencement of their programme to eradicate bovine tuberculosis (TB) from possums in the southern Remutaka Forest.  This involved an aerial drop of 1080 toxin across an area which included all MCT possum trapping operations.  By the time the 1080 aerial drop took place we had dispatched more than 1200 possums.

With the OSPRI programme now in play and a second 1080 aerial drop scheduled for 2021/2022 the possum numbers were expected to be significantly reduced for some time.  Consequently, our possum trapping was put on hold and our efforts redirected on a new Stage 4.

This change in direction took the form or an extensive stoat trapping project over approximately 3000 hectares in rugged terrain on the east side of the Orongorongo River.  The main purpose of the project being to extend the 'safe zone' for the kiwi population already established on the west side of the river.

With a $200k grant from DOC in May 2017 the project began to take shape with the purchase of 1000+ A24 Goodnature re-setting traps and ancillary equipment.  Four hundred of these traps were installed in the existing trapping area operated by the Remutaka Conservation Trust (RCT) and are managed by RCT, while over 500 traps have been installed on new trap lines on the adjacent side of the Orongorongo River and are managed by MCT.

Over 50km of new tracks were cut and the traps installed by a band of MCT volunteers over a 6 month period assisted by a helicopter to get workers to the more remote parts of the project area.  These traps are serviced twice per annum over a weekend by a group of 20+ volunteers.

Refer to our Autumn 2017 Newsletter for full details.

This map shows the areas where we are working in the Remutaka Forest Park.

Stage 4 (May 2017): 1000 A24 traps installed in RFPT trapping zone and on new traplines on the eastern side of the Orongorongo River. 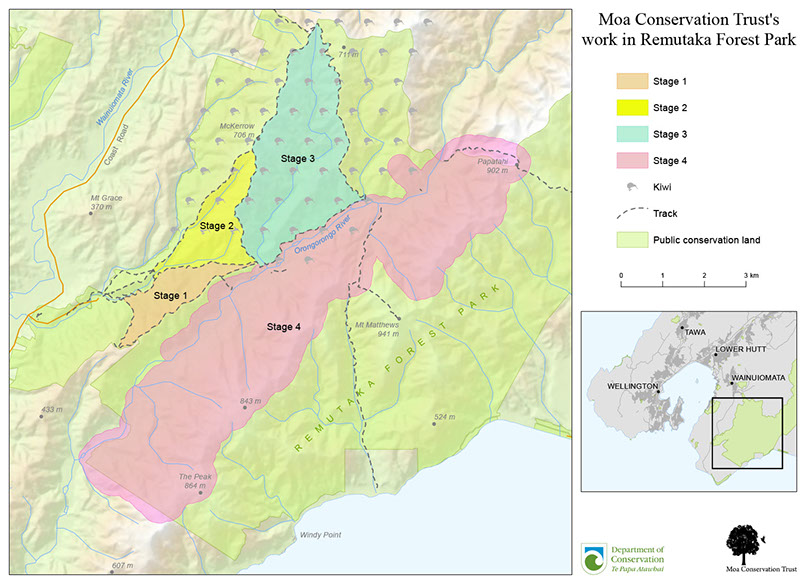 By significantly reducing the number of predators in our territory, native birds can be reintroduced and native birdsong restored in the area – tieke, kokako and toutouwhai will have the chance to thrive.

The Greater Wellington region has a population of 487,000 – the majority of which are less than an hour away from the Catchpool and Orongorongo Valleys. The Catchpool Valley is the gateway to the Remutaka Forest Park.

The Orongorongo Track is one of the most popular walks in New Zealand and the Tawa Grove Walk is specially designed for disabled or elderly people. The significant number of visitors to the area (estimated at more than 10,000) that walk these two tracks, and the many other tracks, in the Catchpool and Orongorongo Valleys, will have the opportunity to hear native birdsong and spot native birds in their natural habitat.

This will be a real win in the battle for preservation
of New Zealand’s native bird life.

In early June 2021 a 20 strong combined troupe of RCT and MCT stalwarts and young enthusiastic conservationists spent a full-on, fun weekend together, all in the name of science. The aim was to deploy acoustic monitoring equipment on the east side of the Orongorongo River where MCT has been trapping, to determine if kiwi had crossed the river and taken up residence there. The preliminary findings show either confirmed kiwi presence or a very high confidence of their presence, at several locations including a male and female pair… exciting news indeed, go kiwi! 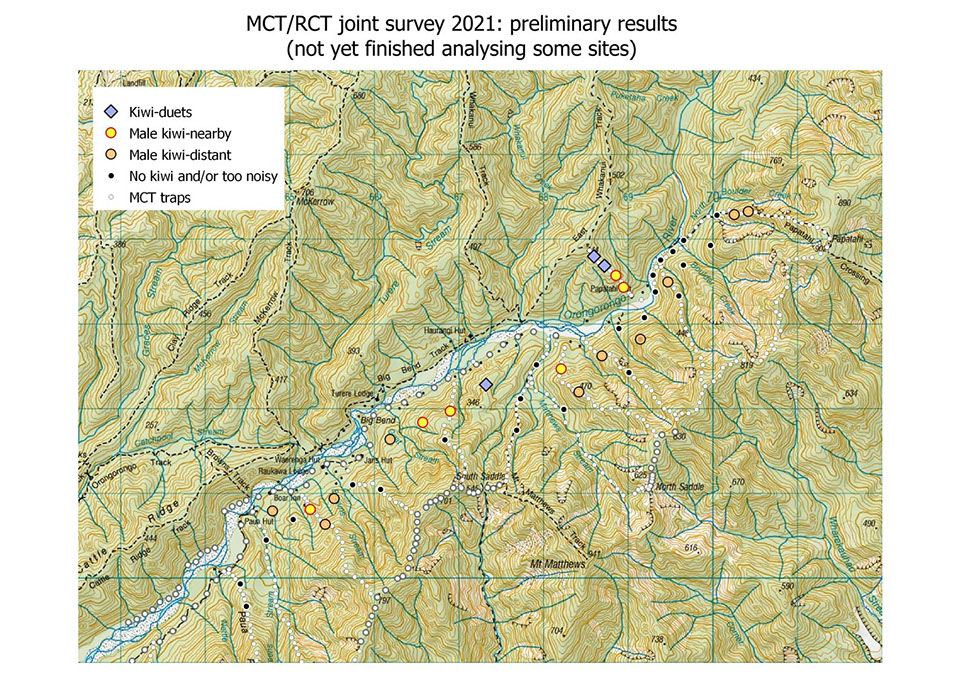 Instead of trapping, this merry band deployed 41 acoustic recorders in early June 2021 which were then retrieved 21 days later

under the Charitable Trusts Act 1957.

The territory for predator eradication was

established in discussion with Department